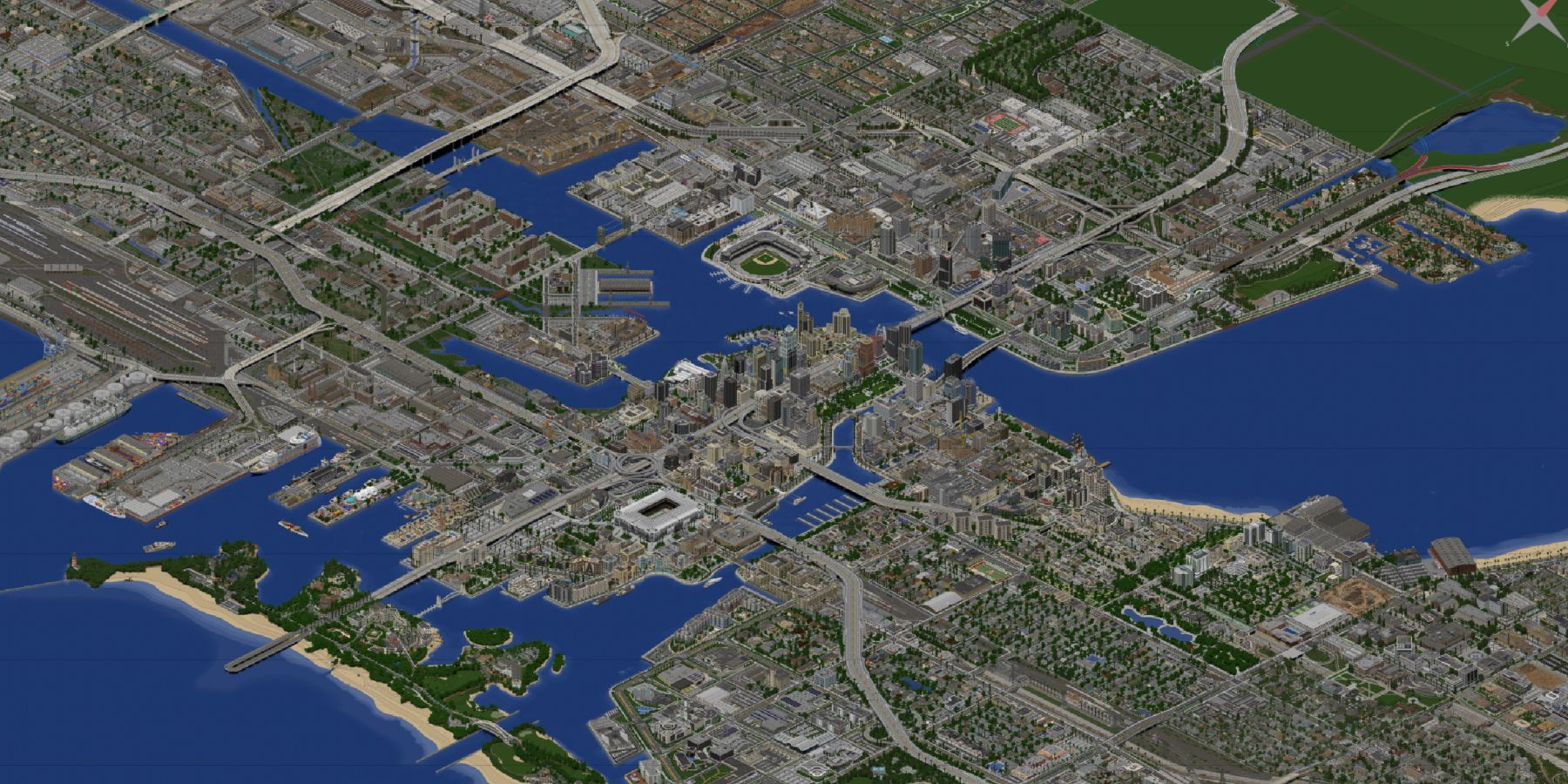 A creative Minecraft player has unveiled a full-fledged city that took over 11 years and the work of hundreds of volunteers to construct inside the voxel-based sandbox game. Complete with towering skyscrapers, suburbs, highways, and its own airport, the massive construction makes even impressive projects like a recent recreation of Notre-Dame Cathedral in Minecraft look small in comparison.

Released in 2011 by creator Markus Persson’s Mojang Studios, Minecraft is a crafting and survival sandbox game that has gone from an indie darling to the best-selling video game of all time in just over a decade. Players exploring Minecraft’s procedurally generated, voxel-based world can use the game’s crafting and construction mechanics to create tools, shelters, and even entire cities as this impressive creation shows. The ability to design and build nearly anything imaginable has led to some remarkably inventive in-game creations by users, like the player who spent 7,000 hours creating a Minecraft base complete with hot air balloons and floating islands.

In a post on r/gaming, Reddit user NJDaeger showed off a screenshot of a city in Minecraft that took the work of over 500 volunteers and 11 years of build time to complete, with the airport alone requiring 2.5 years to construct in-game. Commenters responding to the post were astounded by the level of detail on display in the screenshot, with many users joking that they struggled to build even simple huts in Minecraft. In response to one person’s query, NJDaeger noted that the numerous buildings visible in the city weren’t just empty shells and that each one featured a full interior.

The massive and detailed Minecraft city, named Greenfield, required the contributions of hundreds of volunteers to create, each of whom was required to fill out an application to be eligible to work on the project. Like any major city in the real world, Greenfield features a number of distinct suburbs and districts with their own unique feel and architectural styles. These sorts of large-scale creations aren’t unusual in Minecraft. One player is even working to fully recreate the hit indie game Undertale in Minecraft, but the astonishing level of detail on display in Greenfield puts it in a class of its own.

In the 11 years since it was first released Minecraft has transformed from an obscure indie title to one of the most widely recognizable intellectual properties on the planet, with characters like Minecraft’s Creepers showing up on everything from controllers to stationery. The ability to build whatever a player desires, be it a massive city or a Jenga tower with realistic physics, makes Minecraft one of the most interesting sandboxes in gaming and one that seems primed to keep imaginative gamers churning out creative constructions for years to come.

MORE: Other Features Minecraft 1.20 Could Add to the Desert Biome